1,308.87
-2.65 (-0.20%)
Real-Time
Market Open
1,308.87
CryptoDickbutts NFTs Erect Nearly 700% In Daily Sales Volume
August 08 2022 - 09:49PM
NEWSBTC
CryptoDickButts (CDB) floor price has skyrocketed with the overwhelming support from popular influencers. CDB soared on Sunday, outpacing other well-known NFT collectibles with significant volume. CDB was able to land the 6th spot for the largest daily trading volume for NFTs on OpenSea. As of this writing, CryptoDickbutts has soared by a whopping 690% or roughly 290 ETH equivalent to around $495,000 surpassing leading NFT projects such as Art Blocks, Cool Cats, and Goblintown. CDB’s trading volume has remarkably increased by over 135% in the last seven days. The CryptoDickbutts is the brainchild of famous comic book artist K.C.Green. Created in 2006, the Dickbutts has become very popular over the internet as a meme shared over varied social media platforms. Related Reading: Decentraland Blooms In Green In Last 4 Days; Boosts Traders’ Appetite In MANA CryptoDickbutts Soars Following 3.8 ETH Farokh  Investment On CDB Dickbutts is a collection of over 161 NFTs which was hereinafter dubbed as the OG Collection rolled out in March 2021. This was then followed by a Series 3 composed of over 5,200 NFTs launched in August 2021. CryptoDickbutts NFT collection wowed everyone as its sales volume soared last week following the announcement of Farokh, Rug Radio host regarding his entry of 3.8 ETH or equivalent to roughly $12,000 into CDB. CryptoDickbutt is far from cheap as the most budget-friendly CDB NFT collectible you can find in Series 3 sells for about 3 ETH or roughly $5,100 as of press time, which has increased by over 31% overnight. This is remarkably the highest that CDB has ever reached which is up by 163% in the previous month. CDB Price Pump Triggered By Massive Influencer Support  In terms of NFT Floor Price, CDB still has a long way to go as it’s currently at the 34th spot, but with CryptoDickbutt’s spike, investor interest and demand has been revived. The meme culture is definitely at its strongest point now, most especially for CDB. While other NFT projects seem to have dwindled in popularity, CryptoDickbutts has emerged stronger than ever. This NFT project is under the CryptoDickbutt DAO, including popular personalities like ProbCause, Blondish, and Steve Aoki. Related Reading: Dogecoin Unseated From No. 10 Spot In Rankings – Can DOGE Stay Relevant? The price pump for CryptoDickbutts is a surprise but somehow Meltem Demirors, Coinshares Chief Strategy Officer, may have something to do with it. Recently, Demiros started this so-called emergency Twitter Spaces on Sunday. Apparently, Demirors mentioned, “The Dickbutt community has always been about one thing and one thing only, and that is the universal truth of one D equals one B… I also think that commenting on prices defeats from the overall objective here. Dickbutts are not about investing. Dickbutts are a culture.” CDB started out as a joke but is now taken seriously by the NFT community. CDB was able to strike partnerships and collaborations with Silver Jets and Naughty America, among others. Crypto total market cap at $1.11 trillion on the daily chart | Source: TradingView.com Featured image from Blockhead, Chart from TradingView.com
Ethereum (COIN:ETHUSD)
Historical Stock Chart
From Sep 2022 to Oct 2022 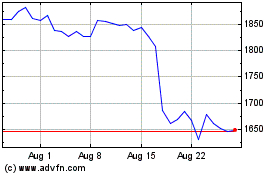 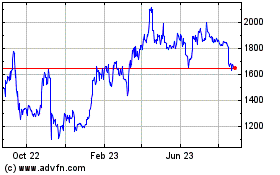 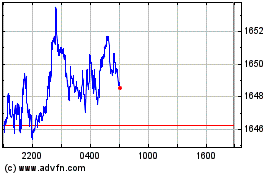