1.67
0.020 (1.21%)
Real-Time
Market Open
1.67
Bitcoin Price Crashes To $19,000, But Stays Strong Against Other Assets
September 27 2022 - 02:03PM
NEWSBTC
The Bitcoin price has experience volatility over today’s trading session as the cryptocurrency rallied to the $20,000 level. Across social media platforms, some market participants celebrated the bullish price action, but they went silent as BTC stumbled back into its range. Related Reading: Bitcoin 90-Day CDD Hits All-Time Low, What Does It Say About Market? At the time of writing, the Bitcoin price trades at $18,900 with a 1% and 3% loss over the last 24 hours and 7 days, respectively. The benchmark cryptocurrency has been moving sideways trading in a range between its current levels and $19,500. Bitcoin Price Stuck In A Range As Global Currencies Trend Downwards Despite this sideways price action and a persistent downside trend across 2022, the Bitcoin price has outperformed other assets in the legacy financial sector. According to a report from the New York Times, the cryptocurrency has been trading “slightly” in the green while major currencies and indexes record losses. As the Bitcoin price moves back and forth from $20,000, the Nasdaq 100 records a 10% loss in September. Over the past 30 days, the British Pound from the United Kingdom (GBP), the Euro from the European Union (EUR), the Japanese Yen (JPY), and other global currencies have been traded in the red as BTC moves sideways. In the past year, these currencies record an 18% to 23% loss against the U.S. dollar. The GBP is one of the worst performers over the past few days as the currency approaches parity with its American counterpart, while the Euro tanked and moved south from its parity with the USD. In the meantime, the U.S. dollar has moved into levels last seen over 20 years ago as macroeconomic uncertainty, and an increase in interest across the world support a risk-off sentiment across global financial markets. These investors seek refuge in the world’s reserve currency. On the Bitcoin price performance compared to global currencies and the U.S. dollar, BTC bull Michael Saylor wrote: Over the past year currencies have collapsed against the dollar: CAD -8%, CNY -9%, AUD -11%, ZAR -17%, KRW -18%, EUR -18%, PLN -21%, GBP -22%, JPY -23%, TRY -52% Over the past four years the dollar has collapsed -67% against #bitcoin. — Michael Saylor⚡️ (@saylor) September 26, 2022  Bitcoin Liquidates Leverage Shorts And Longs Positions As the global economic conditions that are strengthening the U.S. dollar are still in play, Bitcoin seems poised to move sideways away from price discovery. On lower timeframes, a pseudonym trader recorded a spike in Open Interest (OI) over today’s trading session. As high leverage players got taken out with today’s sudden move to the upside and return to the current levels, the Bitcoin price seems poised to move sideways for the time being. However, as NewsBTC reported, the market might see further volatility during this month’s candle close. Related Reading: Do Kwon Statement: A Possible Trigger For Terra Tokens Price Surge Bitcoin’s short-term trajectory will continue to be determined by the performance of legacy financial markets with the Nasdaq 100 and S&P 500 playing a critical role. The latter is hanging by a thread with the potential for further downside into the daily close. The S&P 500 is still hanging on and trying to turn positive on the day. Today’s close will be key.$SPY $SPX pic.twitter.com/WIlQme2kim — Justin Bennett (@JustinBennettFX) September 27, 2022
Terra (COIN:LUNAUSD)
Historical Stock Chart
From Nov 2022 to Dec 2022 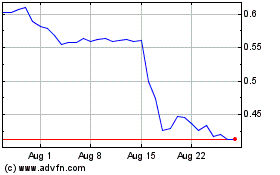 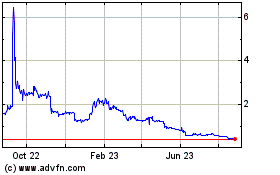 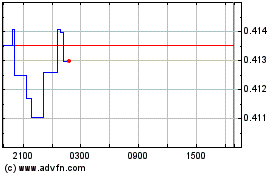