0.99996
0.00 (0.00%)
Real-Time
Market Open
0.99996
How The Tether Peg Could Predict Raging Bitcoin Volatility
May 17 2022 - 12:00PM
NEWSBTC
The whole UST debacle has seen traders emboldened in the market against stablecoins. The result of this had been more investors going after the pegs of other stablecoins such as USDT and trying to see if they can destabilize the coin. Most prominent of this had been Tether USD, whose peg saw the most opposition as its peg to the U.S. dollar was heavily challenged. This challenge suggests that there could be more volatility coming. Tether Challenge Ramps Up One thing to note is that periods of challenges like these are mostly arising from periods of extreme market stress and liquidations. Such were the market conditions for the last week after the UST de-pegging. This ultimately leads to large deviations in the price of stablecoins such as USDT and USDC when it comes to the $1 peg. Although in this case, the majority of the deviations were recorded in USDT alone as USDC held up better in the market. Related Reading | Bitcoin Marks Seven Consecutive Red Candles, Paints Gruesome Picture For Market Tether (USDT) which has always operated under high scrutiny from some in the market had begun trading below its $1 peg after the UST news broke. This gap would grow a bit wider with time although the stablecoin would regain its peg once more. However, the scrutiny that accompanies the stablecoin explains why it was the obvious target of the market.  USDT loses dollar peg following UST crash | Source: USDT/USD on TradingView.com This had inadvertently created an opportunity for funds that had access to Tether redemptions. These funds had been able to take advantage of this slight de-pegging and presumably profited off it until the digital asset could return to its 1:1 peg. More Volatility Coming? On Thursday, the market saw one of the highest yearly volatility trends in a one-day period. This volatility had been brought on by the massive sell-offs that rocked the market, although this volatility has since declined since then. Related Reading | Ethereum Hashrate Breaks All-Time High, Will Price Follow? However, with the USDT peg being continuously challenged in the market, there may be more volatility yet to come. If a stablecoin such as USDT, which is currently the largest stablecoin in the market, were to lose its peg, it would no doubt have an even worse impact on the market than UST did. Basically, a de-pegging such as this could see the market dive deeper given that more than 50% of all open interest in the derivatives market are USDT collateral-based. The asset also shares the most trading pairs of any other stablecoin. So a de-pegging could lead to historical level short squeezes which would essentially cripple the market. Also, an event like this would set mainstream acceptance back years as more people would become fearful of the market.  Loss of USDT peg could lead to extreme volatility | Source: Arcane Research Featured image from CoinGeek, charts from Arcane Research and TradingView.com
Tether USD (COIN:USDTUSD)
Historical Stock Chart
From Jan 2023 to Feb 2023 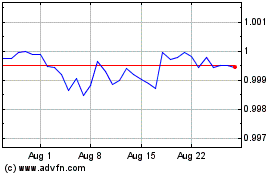 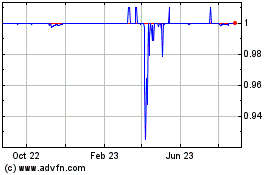 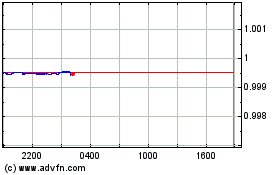