The Australian dollar weakened against its major counterparts in the Asian session on Tuesday, as an energy crisis in Europe sparked concerns about a recession and uncertainty over the pace of rate hikes by the U.S. Federal Reserve made investors cautious.

The focus will be on Fed chairman Jerome Powell's speech on Friday for hints about future rate hikes and monetary policy outlook.

The aggressive rate hikes in the U.S. to control soaring inflation could spark the recession.

In economic news, the manufacturing sector in Australia continued to expand in August, albeit at a slower rate, the latest survey from S&P Global showed with a manufacturing PMI score of 54.5.

That's down from 55.7 in July, although it remains above the boom-or-bust line of 50.

The aussie dropped to 0.6856 against the greenback, its lowest level since July 19. The aussie is poised to challenge support around the 0.67 mark.

The aussie edged down to 0.8950 against the loonie, pulling back from a previous 6-day high of 0.8996. The aussie is seen finding support around the 0.88 level.

In contrast, the aussie remained higher against the euro, at an 8-day high of 1.4407. On the upside, 1.41 is possibly seen as its next resistance level.

Looking ahead, PMI reports from major European economies are due in the European session.

U.S. new home sales for July and Eurozone consumer sentiment index for August are scheduled for release in the New York session. 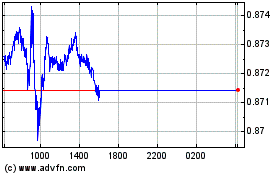