The U.S. dollar was lower against its major counterparts during European deals on Tuesday, despite the release of a data showing better than expected U.S. consumer prices in the month of March.

The consumer price index climbed 0.6 percent in March after rising by 0.4 percent in February. Economists had forecast an increase of 0.5 percent.

Excluding food and energy prices, core consumer prices rose 0.3 percent in March following an increase of 0.1 percent in the previous month. Economists had expected core prices to rise by 0.2 percent.

Boston Federal Reserve Bank President Eric Rosengren said on Monday that the economy is likely to grow rapidly this year, although the labour market recovery could take longer.

Policy makers "can be more patient and wait for more tangible signs that inflation has increased, rather than just forecasts, before starting to raise rates," he added.

The dollar rose in the Asian session, as U.S. bond yields climbed following better demand at auctions of three- and 10-year notes on Monday.

Data from Destatis showed that German wholesale price rose for a second straight month and at the fastest pace in four years in March, largely led by higher prices for petroleum products.

The wholesale price index rose 4.4 percent year-on-year, which was the fastest pace since March 2017, when they increased 4.8 percent.

The greenback remained lower against the yen, at a 5-day low of 109.13. The pair had closed Monday's deals at 109.37. If the greenback extends decline, 105 is possibly seen as its next support level.

The greenback declined to the weakest level since March 4 against the franc, at 0.9209. At yesterday's trading close, the pair was quoted at 0.9222. On the downside, 0.88 is possibly seen as its next support level.

The greenback was trading at 1.3754 against the pound, slightly easing off from a high of 1.3694 hit at 9:00 am ET. The pound-greenback pair had ended yesterday's trading session at 1.3736. The greenback is seen finding support around the 1.41 region.

Data from the Office for National Statistics showed that the UK economy expanded in February but at a slower than expected pace.

Gross domestic product grew 0.4 percent, following a revised 2.2 percent fall in January. But this was slower than the expected growth of 0.6 percent. 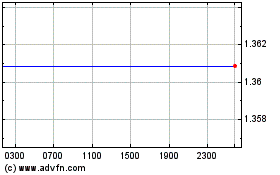