CN (TSX: CNR, NYSE: CNI) today announced that it has appointed Tracy Robinson as President and Chief Executive Officer and as a member of its Board of Directors, effective February 28, 2022. This appointment follows the previously announced retirement of Jean-Jacques (“JJ”) Ruest, who will depart CN’s Board on February 28, 2022 but remain at CN in an advisory role until March 31, 2022 to ensure a seamless transition.

Ms. Robinson, who will be joining CN from TC Energy and previously spent almost three decades at Canadian Pacific, is a well-respected and seasoned public company executive who brings more than 35 years of operational management, strategy development, and project execution experience to drive growth and profitability to CN. She has a proven track record as an extraordinary high-performing leader, for which she is highly regarded within the Canadian federal and provincial regulated natural gas industry and beyond.

CN also announced several changes to its Board of Directors. The Company has appointed The Hon. Jean Charest P.C. as an independent Director. Shauneen Bruder has been appointed Vice Chair of the Board. By no later than CN’s 2022 Annual General Meeting (“AGM”), CN will appoint two new independent Directors with North American railroad experience to the Board.

"We are thrilled to have Tracy join CN as President and CEO and are confident that CN has the right team to lead it into the next phase of growth. She brings more than 35 years of operational management, strategy development, and project execution experience to drive growth and profitability. I would like to thank Shauneen for leading the Search Committee through a robust process that identified the right leader to drive growth, continued operational improvement, technological advancement, and shareholder value, and attract a world-class workforce. Additionally, we are pleased to welcome Jean to the Board now and look forward to welcoming two additional Directors with railroad experience. Our strategy is well-underway, and we have made significant progress towards building the railway of the future."        — Robert Pace, Chair of the Board of Directors of CN

“I have no doubt that Tracy will be an extraordinary leader for the next phase of CN’s journey and I am very much looking forward to working closely with her. I want to express my gratitude to my fellow members of the Board and Search Committee for their work in this very rigorous and thorough process and JJ Ruest for the leadership he has provided as CEO since 2018. We wish JJ all the best in his upcoming retirement.”        — Shauneen Bruder, Vice Chair of the Board of Directors of CN

“This is a transformational period at CN, and I couldn’t be more excited about the opportunities ahead. Our focus is on building the railway of the future – one that creates shareholder value by meeting the needs of our customers, employees, communities, and the economies that depend on us, safely, reliably, and efficiently. I look forward to working closely with CN’s extremely talented railroaders, Board, and management team as we take CN to the next level of performance and industry leadership. I also want to say that I respect and value CN’s rich history in Montréal and in Québec, where the common and official language is French. I am excited to be returning to the wonderful city of Montréal, and I have already begun French lessons to ensure I am able to fully embrace the experience of living in Québec and communicate with CN’s valued employees and customers across the continent.”         — Tracy Robinson, President and Chief Executive Officer of CN

CN has entered into a Resolution Agreement with CIFF Capital and TCI (collectively “TCI”). As part of that Resolution Agreement, CN and TCI will mutually agree on the appointment of the two independent Directors to the Board prior to the 2022 AGM. TCI has agreed to withdraw its requisition for a Special Meeting of Shareholders, which was previously scheduled to be held on March 22, 2022, and to support the election of all CN Director nominees at the 2022 and 2023 AGMs.

CN is a world-class transportation leader and trade-enabler. Essential to the economy, to the customers, and to the communities it serves, CN safely transports more than 300 million tons of natural resources, manufactured products, and finished goods throughout North America every year. As the only railroad connecting Canada’s Eastern and Western coasts with the U.S. South through a 19,500-mile rail network, CN and its affiliates have been contributing to community prosperity and sustainable trade since 1919. CN is committed to programs supporting social responsibility and environmental stewardship.

Forward-looking statements are not guarantees of future performance and involve risks, uncertainties and other factors which may cause the actual results or performance of the Company to be materially different from the outlook or any future results or performance implied by such statements. Reference should be made to Management’s Discussion and Analysis in CN’s annual and interim reports, Annual Information Form and Form 40-F, filed with Canadian and U.S. securities regulators and available on CN’s website, for a description of major risk factors.

Canadian National Railway (TSX:CNR)
Historical Stock Chart
From May 2021 to May 2022 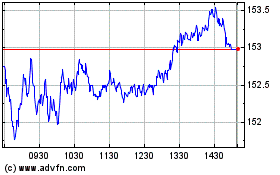