"This past quarter and the year leading up to it has been a transformational period for Alpha Cognition," said Michael McFadden, the Company’s Chief Executive Officer. "We have delivered positive pre-clinical results for the ALPHA-1062 mild-TBI program and have delivered positive pre-clinical results for ALPHA-0602, our progranulin gene-therapy for ALS. The 2nd quarter will be eventful, with the company expected to report top-line results from the pivotal bioavailability and bioequivalence registration trials of ALPHA-1062 required for approval for the treatment of mild to moderate dementia of the Alzheimer’s type. Positive data will set the stage for a third quarter NDA submission. Our team continues to execute according to plan in this transformational year for the Company.”

ALPHA-1062, is a patented new chemical entity that has demonstrated safety and improved tolerability in human clinical trials. It is being developed as a new generation acetylcholinesterase inhibitor for the treatment of Alzheimer's disease, with minimal gastrointestinal side effects and novel routes of administration. ALPHA-1062's active metabolites are differentiated from donepezil and rivastigmine in that they may sensitize neuronal nicotinic receptors, most notably the alpha-7 subtype, which is known to have a positive effect on cognition. ALPHA-1062 is also being developed in combination with memantine to treat moderate to severe Alzheimer's dementia and in a nasal spray formulation to treat traumatic brain injury.

ALPHA-0602 (Progranulin) is expressed in several cell types in the central nervous system and in peripheral tissues, regulates cell survival and certain inflammatory processes, and plays a major role in regulating lysosomal function and microglial responses to disease. Its use for the treatment of neurodegenerative diseases has been patented by the Company and granted an Orphan Drug Designation.

Neither TSX Venture Exchange (the “TSX-V”), OTC Markets Group, nor the TSX-V’s Regulation Services Provider (as that term is defined in policies of the TSX-V) accepts responsibility for the adequacy or accuracy of this release.

This news release is not, and under no circumstances is to be construed as, an advertisement or a public offering of securities. No securities commission or similar authority in Canada or in any other jurisdiction has reviewed or in any way passed upon this news release or the merits of the securities described herein and any representation to the contrary is an offence.

This news release includes forward-looking statements within the meaning of applicable securities laws. Except for statements of historical fact, any information contained in this news release may be a forward‐looking statement that reflects the Company’s current views about future events and are subject to known and unknown risks, uncertainties, assumptions and other factors that may cause the actual results, levels of activity, performance or achievements to be materially different from the information expressed or implied by these forward-looking statements. Forward‐looking statements can be identified by the words “may,” “might,” “will,” “could,” “would,” “should,” “expect,” “intend,” “plan,” “objective,” “anticipate,” “believe,” “estimate,” “predict,” “project,” “potential,” “target,” “seek,” “contemplate,” “continue” and “ongoing,” or the negative of these terms, or other comparable terminology intended to identify statements about the future. Forward‐looking statements in this news release include statements regarding the Company’s business strategy, market size, potential growth opportunities, capital requirements, clinical development activities, the timing and results of clinical trials, regulatory submissions, potential regulatory approval and commercialization of the technology. Although the Company believes that we have a reasonable basis for each forward-looking statement, we caution you that these statements are based on a combination of facts and factors currently known by us and our expectations of the future, about which we cannot be certain. The Company cannot assure that the actual results will be consistent with these forward-looking statements as a result of known and unknown risks, uncertainties, assumptions and other factors. These risks, uncertainties, assumptions and other factors include those associated with clinical studies and manufacturing, as well as development and commercialization of the Company’s products; the need for additional financing to maintain operations; risks posed by the economic and political environments in which the Company operates and intends to operate; market instability due to the COVID-19 pandemic; the potential for losses arising from the expansion of operations into new markets; increased competition; assumptions regarding market trends and the expected demand and desires for the Company’s products and proposed products; reliance on industry manufacturers, suppliers and key personnel; the failure to adequately protect intellectual property; a failure to adequately manage future growth; adverse market conditions; and failure to satisfy ongoing regulatory requirements or obtain regulatory approvals. These forward‐looking statements speak only as of the date of this news release and, other than as required by applicable securities laws, the Company undertakes no obligation to revise or update any forward‐looking statements, even if new information becomes available in the future.

This news release may also contain estimates and other statistical, market and industry data from independent parties or made by the Company relating to our industry. This data involves a number of assumptions and limitations, and you are cautioned not to give undue weight to such estimates. We cannot guarantee the accuracy and completeness of information from third party sources.

Net loss for the year

Alpha Cognition (TSXV:ACOG)
Historical Stock Chart
From May 2022 to Jun 2022 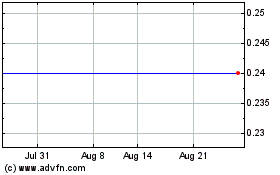 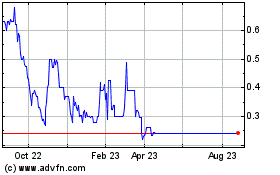 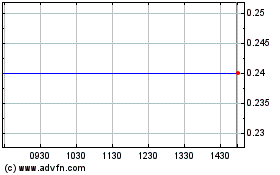