VANCOUVER, BC, June 8, 2021 /CNW/ - Foran Mining Corporation (TSXV: FOM) (OTCQX: FMCXF) ("Foran" or the "Company") is pleased to announce the discovery of six new high priority targets on its extensive land package at its McIlvenna Bay Project and plans to commence exploration drilling on these targets in July 2021. The regional program will be focused on realizing the camp-scale potential of its flagship, 100% owned McIlvenna Bay Deposit in Saskatchewan, Canada, and is in addition to the ongoing infill and step-out program at the McIlvenna Bay Deposit.

A review of recently acquired and historical geophysical and drilling data has resulted in a greatly improved understanding of the controls on mineralization and the definition of the highest priority drilling targets close to planned infrastructure at the McIlvenna Bay Deposit.

Ampere (7km East of McIlvenna Bay Deposit) & Faraday (4km East of McIlvenna Bay Deposit)
Ground electromagnetic ("EM") surveys conducted over winter have confirmed large airborne EM anomalies at the Ampere and Faraday prospects (see Figure 1). Both targets are within 200m of surface under approximately 30m of cover and hosted on a major structure interpreted from magnetic data. The Ampere anomaly is similar to McIlvenna Bay, while the Faraday anomaly appears to be stronger.  Both prospects are within 7 kilometres ("km") of the planned central processing infrastructure and thus represent high priority targets for Foran. Drilling over the summer will confirm if these anomalies are associated with economic mineralization.

Bigstone South & Bigstone North (~200m from Bigstone Deposit)
At the Bigstone deposit, located approximately 25km west of the McIlvenna Bay Deposit, a review has defined the structural controls on the existing Deposit and Foran geoscientists have applied this new understanding to several nearby geophysical targets. These include the Bigstone North and Bigstone South targets, which lie on the same structure within 200m main Bigstone Deposit. These targets offer exciting possibilities to expand the existing resources in the area and will be drilled in conjunction with planned holes at the existing Bigstone Deposit which target growth of the current inferred resources.

Dan Myerson, Executive Chair of Foran, commented: "The nature of VHMS deposits is that they are found in clusters and McIlvenna Bay is likely just one ore body in a camp of many potential deposits. We are extremely excited to get drills turning on these highly prospective new targets and potentially add even more to our multi-deposit camp. This new program has the fantastic potential to deliver significant additional value beyond what we are already creating through the infill and step out drilling currently in motion at McIlvenna Bay. We've been able to accelerate our plans due to the support and CA$100m funding recently received from Prem Watsa's Fairfax, who recognises the attractive returns that we can achieve through developing our Deposit in a carbon-neutral and safer way. We are delighted to be able to quickly convert this investment into potential value for all stakeholders and look forward to providing additional details on the programme in the weeks and months ahead."

Foran will optimize its investment in exploration through a disciplined approach to target generation and prioritization, integration of multidisciplinary data, and staged drilling campaigns so that learnings can be incorporated into subsequent targeting. Expansion of exploration activities into the rest of Foran's extensive ground holdings will continue in 2022. 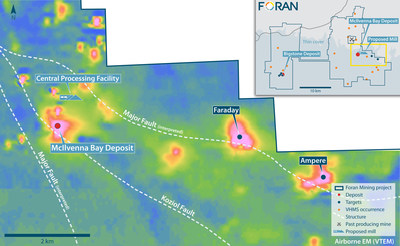 Foran Mining is a copper-zinc-gold-silver exploration and development company, and we are committed to supporting a greener future, empowering communities, and creating circular economies which create value for all our stakeholders, while also safeguarding the environment.

Our goal is to build the first mine in Canada designed to be carbon neutral from day one of production. We are in the feasibility stage of development for our flagship McIlvenna Bay project in eastern Saskatchewan.

McIlvenna Bay is a copper-zinc-gold-silver rich VMS deposit intended to be the centre of a new mining camp in a prolific district that has already been producing for 100 years. McIlvenna Bay sits just 65km from Flin Flon, Manitoba and is part of the world class Flin Flon Greenstone Belt that extends from Snow Lake, Manitoba, through Flin Flon to Foran's ground in eastern Saskatchewan, a distance of over 225km.

This news release contains "forward-looking information" (also referred to as "forward looking statements"), which relate to future events or future performance and reflect management's current expectations and assumptions. Often, but not always, forward-looking statements can be identified by the use of words such as "plans", "hopes", "expects", "is expected", "budget", "scheduled", "estimates", "forecasts", "intends", "anticipates", or "believes" or variations (including negative variations) of such words and phrases, or state that certain actions, events or results "may", "could", "would", "might" or "will" be taken, occur or be achieved. Such forward-looking statements reflect management's current beliefs and are based on assumptions made by and information currently available to the Company. All statements, other than statements of historical fact, are forward-looking statements or information. Forward-looking statements or information in this news release relate to, among other things: complete the feasibility study in a timely manner, including the anticipated capital and operating costs, sustaining costs, net present value, internal rate of return, payback period, process capacity, average annual metal production, average process recoveries, anticipated mining and processing methods, proposed PFS production schedule and metal production profile, anticipated construction period, anticipated mine life, expected recoveries and grades, anticipated production rates, infrastructure, social and environmental impact studies; future financial or operating performance of the Company, subsidiaries and its projects; estimation of mineral resources;, exploration results;, opportunities for exploration, development and expansion of the McIlvenna Bay Project and its potential mineralization; achieve carbon neutral status from day one of production; the future price of metals; the realization of mineral reserve estimates; costs and timing of future exploration; the timing of the development of new deposits; requirements for additional capital, foreign exchange risk, government regulation of mining and exploration operations, environmental risks, reclamation expenses, title disputes or claims, insurance coverage and regulatory matters. In addition, these statements involve assumptions made with regard to the Company's ability to develop the McIlvenna Bay Project and to achieve the results outlined in the PFS, and the ability to raise capital to fund construction and development of the McIlvenna Bay Project. 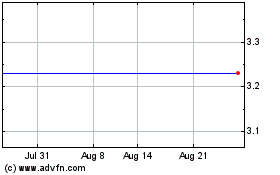 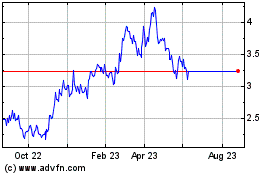 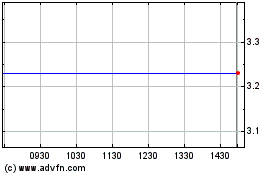