VANCOUVER, BC, Aug. 17, 2021 /CNW/ -- Silver One Resources Inc. (TSXV: SVE) (OTC Pink: SLVRF) (FSE: BRK1) - "Silver One" or the "Company") is pleased to announce commencement of a 1,500-meter diamond drilling program on its 100% owned Cherokee Project located in eastern Nevada, USA. Cherokee is a district-size exploration play with multiple epithermal vein targets that have never been drill tested, plus excellent discovery potential for additional mineralized systems within the Company's extensive property holdings. The current drilling will test rich silver-copper-gold epithermal vein targets, both along-strike and to depth, on patented claims overlying the past producing Cherokee and Southeast Cherokee historic workings (Figures 1 and 2). Additional drilling of veins and targets outside patented land, but still within the Company's claims, is planned for 2022 following environmental permitting.

These veins have been traced on the patented claims alone for over 1.75 km along strike and are known to extend off the patents to both the northwest and southeast. Cherokee and Southeast Cherokee veins occur within an extensive structural zone of multiple veining and alteration that has been traced for over 12 km along strike. Individual vein thicknesses vary from 2 m to 10 m within a wider 50 meter-thick envelope of hydrothermally altered rock, including sheeted or stockwork of quartz-calcite veinlets that strike NW and generally dip 60 to 75 degrees to the southwest.

Earliest historic production from the Cherokee mine dates back to the 1880's. Production since then was scarce, and the total production is unknown. Shipments reported by a rancher in the 1950's, however, indicate that materials produced exceeded 1,000 g/t silver (Tschanz & Pampeyan, 1973).

Textures seen at the Cherokee workings illustrate classic epithermal boiling point textures (Figure 3), which are consistent with the strong silver and base metal (copper +/- zinc, lead) values typically seen in this portion of an epithermal system. Similar epithermal veins were noted in the early mining of the Pioche precious and base metal camp to the north of Cherokee. The Pioche veins were hosted in Paleozoic limestones, these carbonate rocks being of the same age as those that underlie much of Silver One's Cherokee project. Subsequent mining at Pioche uncovered larger tonnage, base and precious metal bearing carbonate replacement deposits (CRD's), with mining of that camp lasting until the mid-1990's.

Gregory Crowe, President and CEO commented; "The geological, geochemical and geophysical characteristics of multiple targets in the Cherokee project present a unique opportunity for discovery. High-grade silver and copper values on surface in the Cherokee and Southeast Cherokee veins, within wide silicified structures, represent highly prospective drill targets. None of the veins, however, have been drilled. The Cherokee vein targets will be tested first within the patented claims owned by Silver One. Subsequent drilling of these and other veins outside the patents, such as Mojoto, Johnnie and Hidden Treasure, where high-grade silver-gold values up to 1,895 gm/t silver and 2 gm/t gold have been found (October 23, 2018 News release), as well as other targets such as potential replacements or porphyry style targets at Garden Mountain, Blue Nose and Viola (Figure 2), will be considered for 2022".

A large magnetic high in the Blue Nose-Viola area was outlined in Silver One's 2019 airborne gradient magnetic survey and may be representative of a buried porphyry intrusive (Nov.11, 2019 news release). Three-dimensional modelling of the magnetic data identified a large northeast oriented zone of low magnetic susceptibility by the eastern margin of the Viola and Blue Nose areas (Fig. 2). Drilling of this area in the 1980's by Canyon Resources explored a buried porphyry molybdenum target. However, drilling never penetrated the overlying limestone cover rocks. The geophysical features associated to this low magnetic susceptibility zone have strong similarities with large known porphyry copper, molybdenum, and/or precious metal deposits, reason for which the company geophysicists believe that there could be a porphyry system at depth in the southeastern portion of the property. This interpretation is consistent with an observed corridor of hydrothermal alteration in limestones consisting of recrystallization and sanding coinciding in space with scattered elevated copper and precious metal values.

Strong NW structures and veins emanating from this interpreted intrusive host significant high-grade silver-gold and base metal values as evidenced by surface sampling of the Cherokee, Southeast Cherokee, Johnnie, Hidden Treasure and Mojoto vein systems, the entire corridor having be traced for over 12 km along-strike.

Cherokee is an emerging epithermal silver, gold and copper district located approximately 75 kilometers south of the historic Pioche silver-gold-copper-zinc-lead mining camp. Silver One's property covers 5,200 hectares (52 square kilometers) covering a 12-kilometre long by 4-kilometre wide structurally controlled silver-copper-gold system. It is hosted by Paleozoic aged sediments, similar in part to the host rocks for the mineralized systems at Pioche. From 1869 to present, the neighboring Pioche area mined over 6 million tons producing over 1 million ounces of gold, 20 million ounces of silver, 7 million pounds of copper, 350 million pounds of lead and 700 million pounds of. Production was initially from gold-silver-copper epithermal veins and later from underlying carbonate-hosted replacement-type mineralized bodies. The above historical information was derived from the 1970 Nevada Bureau of Mines Bulletin # 73, Geology and Mineral Deposits of Lincoln County, Nevada by C.M. Tschanz and E.H. Pampeyan.

A 15,000 meter RC and diamond drilling campaign was recently completed in Candelaria, with final assays reported in the July 15, 2021 news release. A preliminary resource estimate and metallurgical testing is underway in preparation for an economic evaluation scheduled to be completed by the end of 2021.

Figure 1. Geology and select surface assays of the Cherokee and Cherokee southeast areas 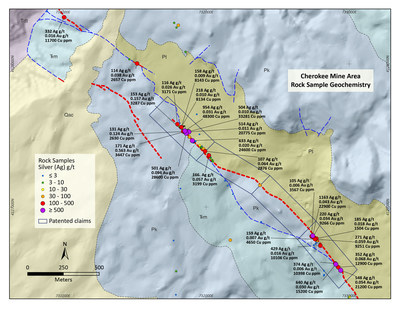 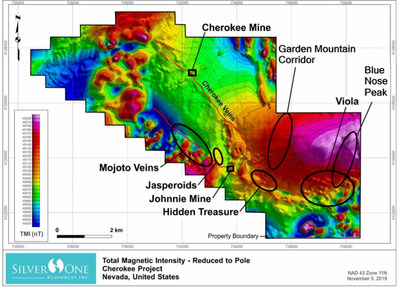 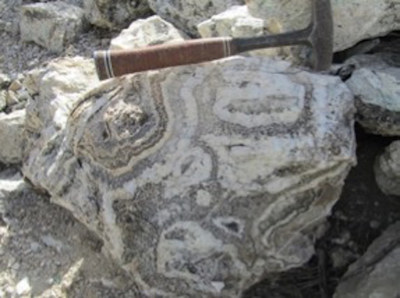 The technical content of this news release has been reviewed and approved by Greg Crowe, P. Geo, President and CEO of Silver One, and a Qualified Person as defined by National Instrument 43-101.

Silver One is focused on the exploration and development of quality silver projects. The Company holds an option to acquire a 100%-interest in its flagship project, the past-producing Candelaria Mine located in Nevada. Potential reprocessing of silver from the historic leach pads at Candelaria provides an opportunity for possible near-term production. Additional opportunities lie in previously identified high-grade silver intercepts down-dip and potentially increasing the substantive silver mineralization along-strike from the two past-producing open pits.

The Company has staked 636 lode claims and entered into a Lease/Purchase Agreement to acquire five patented claims on its Cherokee project located in Lincoln County, Nevada, host to multiple silver-copper-gold vein systems, traced to date for over 11 km along-strike.

Information set forth in this news release contains forward-looking statements that are based on assumptions as of the date of this news release. These statements reflect management's current estimates, beliefs, intentions and expectations. They are not guarantees of future performance. Silver One cautions that all forward-looking statements are inherently uncertain, and that actual performance may be affected by a number of material factors, many of which are beyond Silver One's control. Such factors include, among other things: risks and uncertainties relating to Silver One's limited operating history, ability to obtain sufficient financing to carry out its exploration and development objectives on its minerals projects, obtaining the necessary permits to carry out its activities and the need to comply with environmental and governmental regulations. Accordingly, actual and future events, conditions and results may differ materially from the estimates, beliefs, intentions and expectations expressed or implied in the forward-looking information. Except as required under applicable securities legislation, Silver One undertakes no obligation to publicly update or revise forward-looking information. 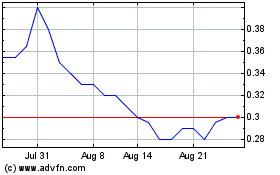 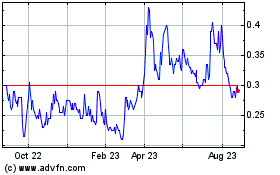 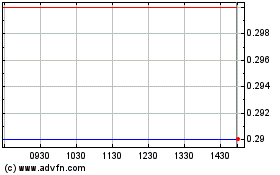