The information contained in this release was correct as at 28 February 2021.  Information on the Company’s up to date net asset values can be found on the London Stock Exchange Website at

All information is at 28 February 2021 and unaudited.
Performance at month end is calculated on a capital only basis

*These percentages reflect portfolio exposure per stock and include more than one holding per stock where relevant.

During February the Company’s NAV per share rose by 2.8%1 to 1,777.70p, underperforming our benchmark index which returned 4.5%1; for comparison the FTSE 100 Index rose by 1.2%1 (all calculations are on a capital only basis).

Equity markets rose in February on the back of continued progress made with the vaccine deployment leading to optimism around a strong economic restart. Rising inflation expectations caused bond yields to spike which continued to fuel the rotation away from long duration growth assets towards more cyclical and value areas of the market. December's GDP (Gross Domestic Product) release showed the UK recording its largest annual contraction since 1709. However, the fall of -9.9% was less severe than many COVID-19 driven downgrade forecasts, which led Sterling higher and, as a result, UK small & mid-caps outperformed their larger peers.

Technical factors were the key driver of the Company’s performance during February. Profit taking from many of last year’s strong performing growth stocks, and the rotation into beneficiaries of the reopening trade caused the portfolio to lag the rising benchmark. IntegraFin, YouGov and Impax Asset Management were among the largest detractors during the month despite no negative newsflow. Only last month Impax reported another quarter of solid AUM (assets under management) growth, therefore, we believe these falls will be temporary and we remain positive on the outlook for these holdings.

Despite trailing our benchmark, the reporting season has been generally positive for many of our holdings, which have continued to trade well. The largest positive contributor during the month was our new holding in Moonpig, which we purchased at IPO (Initial Public Offering) during the month. Our investment case for the business is centred around three key growth drivers: customer acquisitions, orders per user and order value, and later in the month the company provided an encouraging trading update showing growth across all three of these drivers. Shares in Ergomed continued to push higher following its January trading update which highlighted that positive trading in its pharmacovigilance and its Clinical Research Organisation had continued into year end and, as a result, 2020 full year earnings will be ahead of expectations.

The vaccine rollout program continues to gather pace and the market is now heavily focused on the ‘reopening trade’ and the pace at which the world can return to some level of normality. With the UK ahead in its vaccine rollout we are cautiously optimistic around the pace of reopening in the UK. However, questions remain over the vaccine rollout elsewhere in the world and the potential for new variants to resist the vaccine, and as such there remains potential for market setbacks and sharp spikes in volatility. Strengthening sterling and the steepening yield curve has caused a challenging headwind for many global facing growth companies, which this Company owns. However, we do not believe this will be a long-term issue as we do not see persistent higher levels of inflation ahead.

We therefore remain focused on bottom-up company fundamentals, with a bias towards high quality market leading global businesses, which are operating in attractive end markets and run by strong management teams. This is a style that has demonstrably worked over the long-term, and the positive trading updates that we have heard from our companies in recent weeks reassure us that this is the right strategy that will reward our shareholders over the long-term.

Latest information is available by typing www.blackrock.com/uk/brsc on the internet, "BLRKINDEX" on Reuters, "BLRK" on Bloomberg or "8800" on Topic 3 (ICV terminal).  Neither the contents of the Manager’s website nor the contents of any website accessible from hyperlinks on the Manager’s website (or any other website) is incorporated into, or forms part of, this announcement. 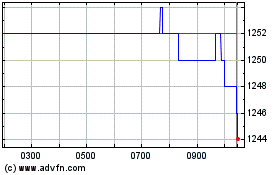