4D pharma plc (AIM: DDDD; NASDAQ: LBPS), a pharmaceutical company leading the development of Live Biotherapeutic products (LBPs) - a novel class of drug derived from the microbiome, today announces a collaboration with Parkinson’s UK, a non-profit organization focused on advancing the understanding of Parkinson’s disease and improving treatments, to establish a Patient Advisory Board.

The Patient Advisory Board (PAB) will be comprised of people living with Parkinson’s. Supported by Parkinson’s UK, the PAB will provide valuable patient-centric perspective to 4D pharma as it continues to advance novel Live Biotherapeutics into the clinic to treat neurodegenerative conditions such as Parkinson’s. The PAB will also focus on raising awareness of the issues people with Parkinson’s face with current treatment options.

“4D pharma selected to work with Parkinson’s UK to represent the patient community as the largest charitable funder of Parkinson’s research in Europe. The contributions of our Patient Advisory Board, with the support of Parkinson’s UK, will be vital to 4D pharma’s efforts to not only develop novel therapeutics for this devastating condition, but also promote a dialogue and partnership with the Parkinson’s patient community,” said Alex Stevenson, Chief Scientific Officer, 4D pharma. “Parkinson’s is the fastest growing neurological condition in the world. It is important that therapeutics in development address the issues of patients. By working with Parkinson’s UK and our Patient Advisory Board, 4D pharma is better able to engage Parkinson’s patients with our clinical programs as we work to bring the first Live Biotherapeutic for the treatment of this condition into the clinic.”

“145,000 people are currently living with Parkinson’s in the UK alone. There is a desperate need for new and better treatments. To develop these, it is vital to involve people affected by Parkinson’s at every stage of research — from setting priorities and making decisions about funding to designing trials,” said Natasha Ratcliffe, Research Involvement Manager at Parkinson’s UK. “We’re delighted to be working with innovative companies like 4D pharma that share these values with us and are bringing new approaches to developing transformational new treatments for Parkinson’s. The Patient Advisory Board will enable people affected by Parkinson’s to have input into the development of this novel treatment.”

4D pharma is a world leader in the development of Live Biotherapeutics, a novel and emerging class of drugs, defined by the FDA as biological products that contain a live organism, such as a bacterium, that is applicable to the prevention, treatment or cure of a disease. 4D has developed a proprietary platform, MicroRx®, that rationally identifies Live Biotherapeutics based on a deep understanding of function and mechanism.

4D pharma's Live Biotherapeutic products (LBPs) are orally delivered single strains of bacteria that are naturally found in the healthy human gut. The Company has six clinical programmes, namely a Phase I/II study of MRx0518 in combination with KEYTRUDA (pembrolizumab) in solid tumours, a Phase I study of MRx0518 in a neoadjuvant setting for patients with solid tumours, a Phase I study of MRx0518 in patients with pancreatic cancer, a Phase I/II study of MRx-4DP0004 in asthma, a Phase II study of MRx-4DP0004 in patients hospitalised with COVID-19, and Blautix® in Irritable Bowel Syndrome (IBS) which has completed a successful Phase II trial. Preclinical-stage programmes include candidates for CNS disease such as Parkinson's disease and other neurodegenerative conditions. The Company has a research collaboration with MSD, a tradename of Merck & Co., Inc., Kenilworth, NJ, USA, to discover and develop Live Biotherapeutics for vaccines.

For more information, refer to https://www.4dpharmaplc.com

Parkinson’s is what happens when the brain cells that make dopamine start to die. There are more than 40 symptoms, from tremor and pain to anxiety. Some are treatable, but the drugs can have serious side effects. It gets worse over time and there’s no cure. Yet.

Parkinson’s is the fastest growing neurological condition in the world. Around 145,000 people in the UK have Parkinson’s.

Further information, advice and support is available on the Parkinson’s UK website, www.parkinsons.org.uk.

All of the Company's forward-looking statements involve known and unknown risks and uncertainties, some of which are significant or beyond its control, and assumptions that could cause actual results to differ materially from the Company's historical experience and its present expectations or projections. The foregoing factors and the other risks and uncertainties that could cause actual results to differ materially include potential delays in its clinical studies, the failure of the PAB to provide meaningful insights into the development of treatments and those additional risks and uncertainties described the documents filed by the Company with the US Securities and Exchange Commission (“SEC”). The Company wishes to caution you not to place undue reliance on any forward-looking statements, which speak only as of the date hereof. The Company undertakes no obligation to publicly update or revise any of its forward-looking statements after the date they are made, whether as a result of new information, future events or otherwise, except to the extent required by law. 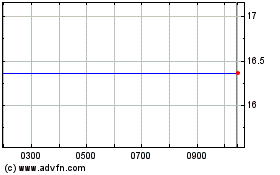