Placing of GBP400,000, Notice of GM and Appointment of Joint Broker

Equatorial Palm Oil plc (AIM: PAL), the Rule 15 cash shell, announces that to enable the Company to explore new corporate opportunities and to provide additional working capital, the Company has raised GBP400,000 (before expenses) through a placing (the "Initial Placing") of 100,000,000 New Ordinary Shares of 0.01p each ("Placing Shares") at a price of 0.4 pence per Placing Share (the "Placing Price"). The Company has entered into a placing agreement ("Placing Agreement") with Brandon Hill Capital Ltd (as joint broker and sole bookrunner) ("Brandon Hill") pursuant to which Brandon Hill agreed to arrange the Initial Placing. Completion of the Initial Placing is conditional upon the satisfaction of the conditions contained in the Placing Agreement including but not limited to, the Placing Shares being admitted to AIM and shareholder approval being given for a re-organisation of the Company's share capital to reduce the nominal of value of the Company's ordinary shares to 0.01 pence per ordinary shares ("New Ordinary Shares") at a general meeting to be held at 10.00 a.m. on 8 September 2020 (the "Re-Organisation Resolution"). A circular ("Circular") convening the general meeting (the "General Meeting") is expected to be sent to shareholders tomorrow.

-- Initial Placing to raise GBP400,000 (before expenses), conditional on the Placing Shares being admitted to trading on AIM and the Re-Organisation Resolution being passed at the General Meeting.

-- Placing net proceeds to be used to explore corporate opportunities and for working capital purposes.

The Company is pleased to announce that it has raised GBP400,000, before expenses, through a placing arranged by Brandon Hill Capital, conditional on the Placing Shares being admitted to trading on AIM and the Re-Organisation Resolutions being passed at the General Meeting (the "Initial Placing").

(1) an acquisition or acquisitions which constitutes a reverse takeover under AIM Rule 14 (including seeking re-admission under the AIM Rules for Companies ("Re-Admission")), or

(2) the Company seeking to become an investing company pursuant to AIM Rule 8, which requires, inter alia, the raising of at least GBP6 million and the publication of an admission document (either being a "Re-Admission Transaction") within six months of 10 June 2020.

The Company is pleased to announce the appointment of Brandon Hill Capital Limited as joint broker to the Company with immediate effect.

Brandon Hill has been issued with 5,000,000 broker warrants exercisable at the Placing Price for a period of 3 years from Admission of the Placing Shares.

The Company intends to use the proceeds of the Initial Placing to fund the exploration of corporate opportunities and for working capital generally.

General Meeting 10.00am on 8 September

Reorganisation) 8.00 am on 9 September

Admission of Placing Shares 8.00am on 10 September

Following the issue of the Placing Shares, and for the purposes of the Disclosure Guidance and Transparency Rules, the Company's total issued share capital on Admission will consist of 456,277,502 Ordinary Shares.

The above figure may be used by shareholders as the denominator for the calculations by which they will determine if they are required to notify their interest in, or a change to their interest in, the Company, under the Disclosure Guidance and Transparency Rules. 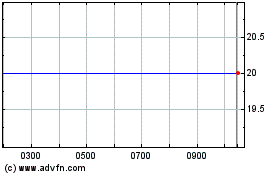