/NOT FOR DISTRIBUTION TO U.S. NEWS WIRE SERVICES OR FOR DISSEMINATION IN THE U.S./

LONDON, March 29, 2022 /CNW/ - Meridian Mining UK S (TSXV: MNO), (Frankfurt/Tradegate: 2MM) & (OTCQB: MRRDF), ("Meridian" or the "Company") is pleased to announce that its ongoing review of historical data of the Santa Helena copper-gold-silver-zinc VMS deposit ("Santa Helena")1, has identified that the gold overprint extends over 1.3km in strike and remains open. The historical Santa Helena mine is an advanced prospect within the Company's camp scale copper-gold VMS Project ("Cabaçal") located in Mato Grosso, Brazil. Near-surface historical diamond drill results, located to the east of Santa Helena's pre-mining VMS resource, returned 18.9m @1.3g/t Au from 6.3m and are coincident with surface trench results of 18.0m @ 1.1 g/t Au (Figure 1). The Company is continuing its evaluation of Santa Helena as it sees this open gold trend and the under-lying Santa Helena VMS mineralization (Figure 2), as having strong attributes for open pit potential that would be incorporated into a larger Cabaçal development scenario. Santa Helena field programs are ongoing.

Dr Adrian McArthur, CEO and President of Meridian, comments, "Meridian's ongoing field programs and historical data reviews are continuing to strengthen our view that Santa Helena represents a robust opportunity for a satellite open pit project. The cross-section below indicates Santa Helena's geology is very similar to that of the Cabaçal Mine's, with a defined VMS envelope being overprinted by steeper gold-bearing structures; something we also expect to see repeated along the intermediate 9km of the Cabaçal Mine Corridor and potentially over the entire Cabaçal camp. Significantly, Santa Helena's open surface gold trend extends 350m beyond the limits of its pre-mining resource envelope, which was focussed on the underlying, but shallow, high-grade massive-sulphide mineralization. These and other geochemical anomalies are open 100m past the last reported trench results, while the lateral but parallel soil anomalies may represent repeats of the gold overprint, all requiring following up. With only part of the pre-mining resource extracted and near-surface gold mineralization open and undeveloped, Santa Helena has significant potential for an open-pit development program. The Company will continue with its validation programs, applying the same methodology as at the Cabaçal Mine to bring Santa Helena towards an updated resource estimation in early 2023." 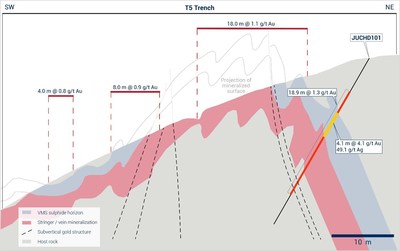 Santa Helena is the most advanced of several prospects along Cabaçal's Mine Corridor. Santa Helena was partially mined between 2006 to 2008, with resource development and small-scale underground mining focused at the time on the high-grade zinc-dominant massive sulphide. The life of mine production was planned to run to 2011, but the 2008 commodities price slump led to early termination of the operation. Similar to the Cabaçal Mine's history, the gold overprint and the full extent of the copper-gold-silver-zinc VMS mineralized halo has remained largely untested since its discovery. Despite Santa Helena's prospective grades and geometry, it was never considered for open pit development. Meridian's immediate focus is on developing the Cabaçal copper-gold mine, while sustaining a medium-term program to develop the potential open pit upside of multiple shallow copper-gold mineralized prospects defined within the Mine Corridor; Santa Helena is the most advanced deposit and is within a granted mining licence.

The Santa Helena deposit (historically also referred to as C2C, and Monte Cristo), is located 9km to the southeast of the Cabaçal Mine area, within the 11km Mine Corridor trend. The deposit was first discovered by BP Minerals (BPM) in 1984, following evaluation of surface soil copper-lead-zinc-gold anomaly, which was found to be associated with gossans enriched in gold and silver. BPM executed three local campaigns of drilling between 1984 and 1989, totaling 100 holes for 10,975m of drilling. At least 17 trenches (735m) were also concluded by BPM, supplementing the drilling results. Meridian's senior geologist, Mr Antonio José de Almeida, was heavily involved in the exploration campaign during this phase. The deposit is associated with the same correlative stratigraphic package as the Cabaçal Mine's; metamorphosed felsic to intermediate volcanics, cherts, tuffaceous volcaniclastic rocks, and gabbroic intrusives. The rocks exhibit a chloritic alteration overprint associated with the VMS event. The mineralization is localized in an east-south-easterly trending fold, with an overall synformal geometry, cut by subvertical shears. Figure 1. Santa Helena historical drilling, trenching, and soil geochemistry. Santa Helena's underground resource outline is shown, highlighting the broad footprint of gold mineralization to the east and to the south.

The former operator at Santa Helena, Prometálica, completed 39 holes for 2479m between 1999 and 2001 and conducted development studies ahead of commissioning the underground mine, with mine production commencing in October 2006. This drilling campaign was focused on the main massive sulphide mineralization, with no sampling of the drill cores for assays until an average down-hole depth of 33.0m. Gold assays are not available for 12 of the holes, and for an additional nine of the holes, the first recorded sample starts within the mineralized halo (grades of 0.1 – 1.0g/t Au). Assay sampling in the original BPM holes (for which data is available in the JUCHD series), is similarly, with an average starting depth of 22.4m. Whilst some angled holes were drilled by BPM, historical drilling was overwhelmingly vertical unsuited to vertical structures.

The advanced nature of Santa Helena, with a defined mineralized envelope and known metallurgical flow sheet and mineral products, means that it can be developed much faster and at a lower risk when compared to more "early stage" but larger prospects located within and outside of the Mine Corridor. This would allow it to be incorporated into a conceptual Cabaçal development program providing supplementary high-grade feed to a centralized mill located at the Cabaçal Mine, while the greater Mine Corridor provides the potential for Cabaçal's long-term scalability.

Historical BP Minerals samples from Santa Helena were analysed with a three-acid digest for base metals with atomic adsorption finish, aqua regia digest for silver with an atomic absorption finish, and fire assay of a 50g charge for gold at the Nomos laboratory in Rio de Janeiro. Quality control measures included the use of laboratory standards, blanks, duplicates, and umpire laboratory checks. Samples from Prometálica underground drilling program were analysed in their on-site mine laboratory (archival searches for analytical protocols and QAQC are progressing).

Stay up to date by subscribing for news alerts here: https://meridianmining.co/subscribe/

Further information can be found at www.meridianmining.co

Meridian Mining UK S is focused on the acquisition, exploration, and development activities in Brazil. The Company is currently focused on resource development of the Cabaçal VMS Copper-Gold project, exploration in the Jaurú & Araputanga Greenstone belts located in the state of Mato Grosso; exploring the Espigão polymetallic project and the Mirante da Serra manganese project in the State of Rondônia Brazil.

Some statements in this news release contain forward-looking information or forward-looking statements for the purposes of applicable securities laws. These statements include, among others, statements with respect to the Company's plans for exploration, development and exploitation of its properties and potential mineralization. These statements address future events and conditions and, as such, involve known and unknown risks, uncertainties, and other factors, which may cause the actual results, performance, or achievements to be materially different from any future results, performance or achievements expressed or implied by the statements. Such risk factors include, among others, failure to obtain regulatory approvals, failure to complete anticipated transactions, the timing and success of future exploration and development activities, exploration and development risks, title matters, inability to obtain any required third party consents, operating risks and hazards, metal prices, political and economic factors, competitive factors, general economic conditions, relationships with strategic partners, governmental regulation and supervision, seasonality, technological change, industry practices and one-time events. In making the forward-looking statements, the Company has applied several material assumptions including, but not limited to, the assumptions that: (1) the proposed exploration, development and exploitation of mineral projects will proceed as planned; (2) market fundamentals will result in sustained metals and minerals prices and (3) any additional financing needed will be available on reasonable terms. The Company expressly disclaims any intention or obligation to update or revise any forward-looking statements whether as a result of new information, future events or otherwise except as otherwise required by applicable securities legislation.

The Company cautions that it has not completed any feasibility studies on any of its mineral properties, and no mineral reserve estimate or mineral resource estimate has been established. Geophysical exploration targets are preliminary in nature and not conclusive evidence of the likelihood of a mineral deposit. 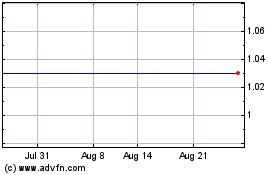 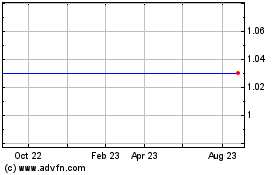 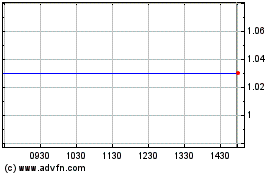